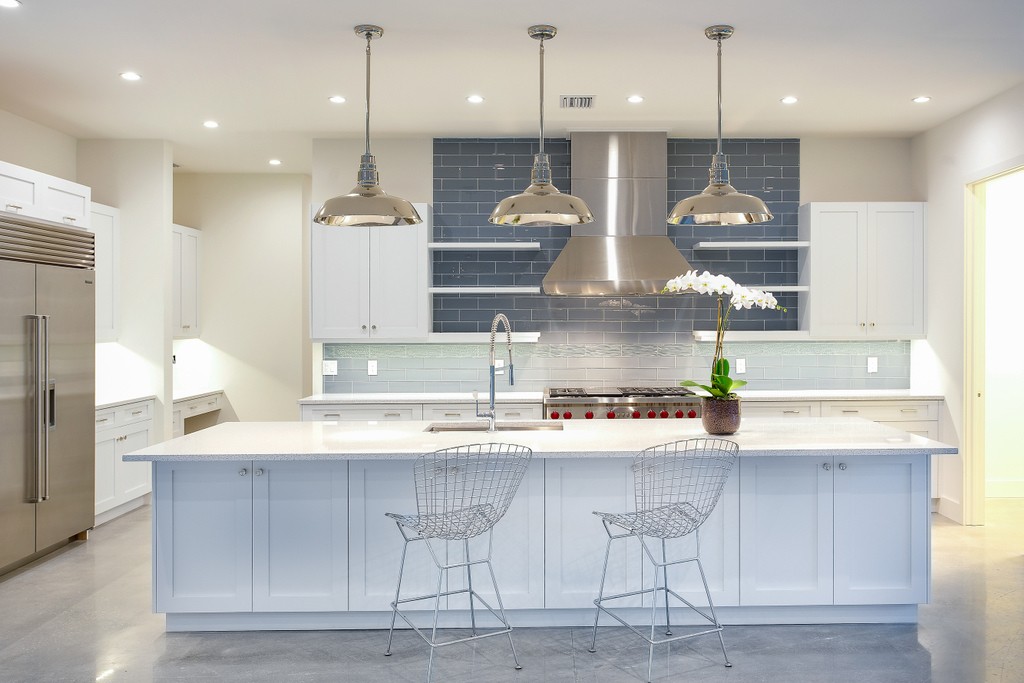 The quiet road leading to the front door of 1259 Southport Drive may have a sleepy 8mph speed limit, but the crisp, clean, white exterior of builder Nick Ferguson’s latest project is anything but pedestrian.

On the market for a smidgen over $2.2 million, the recently completed three-bedroom family home just a quick jaunt from Phillippi Creek Restaurant is a testament to Ferguson’s business acumen.

“I did what I wanted to do,” the Michigan native explains. “I was always working for someone else, so I decided to build this house to my own design – I wanted to break away from other people’s aesthetics. I wanted to demonstrate what I can really do.”

It meant tearing down the original house that stood in the way of his dreams, but Ferguson, who worked on the project with architect John Ziemnicki, of Bradenton-based World Design Inc., has no qualms about that. “It was a piece of property that needed to be demolished,” he says. “It was a risk, but I think Sara and I made the right decision building this house.”

Mention the pejorative “McMansion,” and Ferguson bristles. “I’m totally anti that concept,” he says. “This house has an appeal to someone with a ‘less is more’ approach to life; someone who demands attention to details that I have achieved, but maybe wants to downsize. Maybe they want quality, but not quantity.”

The polished concreate floors, the luxurious kitchen and the attention to details aren’t the only selling points of the abode, which sits at a comfortable 4,615 square feet. According to Ferguson’s wife, Sara, buyers are looking to move away from formal interior design concepts, seeking instead open-plan living. “Blocked off rooms are so formal,” she says. “Very few people want to live that way now. This house has an open environment that has an attractive, contemporary style.”

Work commenced on the house last July, and while Ferguson admits that the property was built to sell quickly, he’s far from ashamed about his desire to promote his skills as both a designer and the head of a construction company. “When I moved to Sarasota I didn’t know anyone,” he says. “I didn’t know a soul. And in the building industry, it’s all about who you know – Sarasota has a good ol’ boy network going on. But this house is a showcase that proves what I can achieve.”

The couple’s future now lies with another lot on the Grand Canal.

“It’s a challenge,” Ferguson concedes. Walking around his prize possession, he notes that the economy appears to be on the up, but there are still challenges ahead for everyone in the building industry.

“I could have gone gangbusters on this house,” he says. “It’s amazing how quickly a builder can go through money. People don’t appreciate that fact. But I’m confident I will sell this house, and that my company will succeed. There’s been a lot of interest from potential buyers. It’s just a question of time.”

Thanks for visiting NC Ferguson Construction. Please send us a message here and we'll get back to you in the next 24 hours.